Tell Them I'm Somebody Else 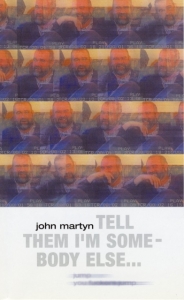 Musicians: Spencer Cozens (keyboards), Jim Lampi (Chapman stick), John Giblin (bass), Arran Ahmun (drums and percussion), Reggie Hastings is credited for slide guitar on Lookin' On but there's not a slide guitar in sight on that track. Possibly Hastings did a slide show on some So Sweet take, but that is not on the video. 'My friend Reggie' might well be the same person that is complaining about John being stingy.

While we sit bousing at the nappy,
and gettin' fou and unco happy,
we think na on the lang Scots miles,
The mosses, waters, slaps, and stiles,
That lie between us and our hame,
Where sits our sulky sullen dame,
Gathering her brows like gathering storm,
Nursing her wrath to keep it warm.

sitenote:
The live recordings were made in Belfast, Elmwood Hall on 29 October 1999 and in Dublin, Vicar Street on 16 November 1999.

Much of the material was re-authored and rereleased February 2012 on a DVD titled One World... One John. A lot of tracks pop up in a different version though and most of the behind the scenes footage was deleted.

*) sitenote:
John gets inspired by a voice sample from Spencer Cozens' synth.
Jump, You Fucker, Jump was possibly the original title John proposed for the video. Someone could have objected to this bad language. The Tell Them title is simply a line from the unreleased song 'Sergeant, Sergeant', played in Dublin too but not included.
Tony Moylett knows his classics and remembers a Derek and Clive Live record by Peter Cook and Dudley Moore from the late seventies:

"This record was legendary among 6th form students in the late 70's and there were two follow up albums each worse than it's predecessor. Many expressions have since been cleaned up and added to the English language phrase book; for instance 'What's the worse job you've ever had?' and 'This C**t came up to me and said hello'. One song on the lp told the story of the day Dud was walking down the street and saw a burning house. A chap on the top floor, while wishing to be rescued, was anxious that he would not survive the fall. The waiting firemen tried to assuage his fears by telling him that they would catch him in a blanket. After a delay they grow impatient and exhort him to decide what to do. Their cry, 'Jump you f***er, jump,' is clearly still influential as Spencer Cozens had sampled it and plays it to John Martyn, thus letting it become the subject of an impromptu jam."

| Paul Hillery
@bigmuffsite found this but didn't see it on your concert list https://t.co/NurVAf1AVs
10 months 2 weeks ago
END_OF_DOCUMENT_TOKEN_TO_BE_REPLACED