Over The Rainbow: The Last Concert, Live 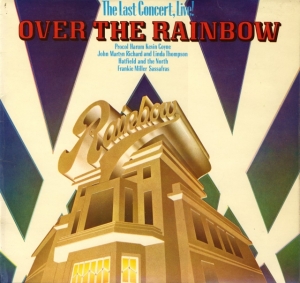 Unique track that should have been on Live At Leeds.

Recorded live on the Virgin Mobile at the Rainbow Theatre, London on Sunday 16 March 1975.
Mixed at Wessex sound studios.
Released 20 June 1975 in 'limited edition' of 50.000 copies.

"Special thanks to Richard Branson and Simon Draper."

You Can Discover is performed by the magic trio with Danny Thompson on bass and John Stevens on drums. The track is listed as Discover The Lover.

John gives a Live At Leeds-like introduction while the audience appears to think he's talking too much:

This is a song for...
You know we've been fairly rough to the old lady while I'd been downing booze too long, going around the bend here and there. And all the ridiculous shit comes out, like, you know:
"Remember 1942 in Clapham when you looked at that blonde the wrong way across the bar..."
"Oh I remember you saw that Portuguese lawyer driver, you dirty old sleeze pot."
All that, really slagging each other off. But when it calmed down I wrote that one. This is the song you sing, right?

The show was announced with this advertisement in the New Musical Express. Tickets were one pound...

| Big Muff
Photographical mystery solved - except for the name of the photographer https://t.co/oSCnGikFSx
8 months 6 days ago