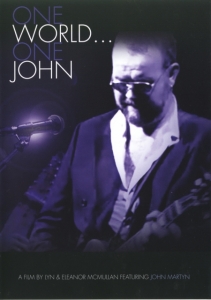 Along with interviews, rehearsal footage and a bonus track (Sergeant, Sergeant).

About half of the material on this DVD is unreleased. A lot of stuff is familiar from the Tell Them video, however much of the behind the scenes and impromptu rehearsal footage of the original VHS tape has been deleted.

Filmed between 1999 and 2003 in Scotland & Ireland.
Directed & Edited by Lyn McMullan
Produced by Eleanor McMullan

"This film on John Martyn was recorded between Nov 1999 and June 2003 in Ireland and Scotland. During the filming and afterwards we had many wonderful, unforgetteble, adventures with John. There's not a day goes by that we don't think of him."

Total playing time 1 hour 56 minutes. Recordings were made at Vicar Street, Dublin in 1999, 2000 and 2003.
The interviews with John were recorded Banbridge, Northern Ireland, 2000.