May You Never | Just Now 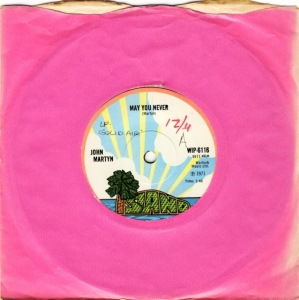 Early and rare band version of May You Never

Released as spin-off from Bless the weather; the song was not to appear on album until February 1973. It was recorded 19 November 1971 at Island's Basing Street studios; John was not happy with the way the song turned out. Sounds managed to review the item one week before it was released.
May You Never has a full band arrangement but the question is: who plays on the record? In the booklet that accompanied the Free Songs of yesterday box set, Free biography author David Clayton added an interesting footnote to the session:

November 19 STUDIO TIME
Kossoff, Kirke, Tetsu record a session with John Martyn for a proposed single version of May You Never. They also record a jam Time Spent (Time Away), later used on Kossoff's solo record, Back street crawler. Studio Time paid for by John Martyn!

One would expect therefore the line-up to be Paul Kossoff, Simon Kirke, Tetsu Yamauchi & JM. But Ian Barnett had a correspondence with Clayton who clarifies:

Koss/ Kirke/ Tetsu aren't featured on it [MYN].... the story goes that Koss/ Martyn/ Kirke/ Tetsu went into the studio to attempt reworking the song but got stoned and gave up, deciding to jam instead- the result 'Time Away'. Martyn then added bits to an old out-take for the single..."
"I'm aware Kossoff is still connected to the single but John himself said to me he's not on it. The same thing happened with the [original] Live At Leeds LP. Koss isn't on it tho' people still swear he is, [he's only] on the extended CD version... We did dig out the [attempted] May You Never session tapes- that's where 'Time Spent' comes from. There was nothing else of interest."

These quotes, coming from the same author, are a bit confusing at first sight. But Clayton is more specific in the Free booklet when he describes the Time Spent track: "The full 18 minute jam which ensued after a session to re-record Martyn's May You Never, as a proposed single, was abandoned."
So for the record it should be noticed that the recording of May You Never (in the first quote), apparently was given up (say the second and third quote). And there's no Paul Kossoff in sight. The original claim was even that Kossoff played guitar and drums! Barnett himself found out where this misunderstanding probably came from:

So it is still unsolved who does play on the single. John does not remember, unfortunately. And Kossoff has left the building.

| Paul Hillery
@bigmuffsite found this but didn't see it on your concert list https://t.co/NurVAf1AVs
10 months 3 weeks ago
END_OF_DOCUMENT_TOKEN_TO_BE_REPLACED