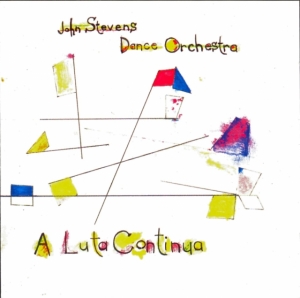 The title is Portuguese for 'The Battle Continues".

sitenote:
John talked about these sessions in 1998 to Rob Young, in his Wire story Feeling Gravity's Pull. The record was released about the time John Stevens died of a heart attack at age 54. The recording date of 24 October 1979 causes some doubt as the Anni single from the same session is said to have been recorded 30 March 1976, which is close to the single's release date.

The liner notes by Michael Hrebeniak demonstrate that John Martyn played an important role in this project.

What is a hero? According to Henry Miller it is 'primarily one who has conquered his fears.' With the international drive for mass conformity reaching biblical proportions, fewer people than ever are free. Freedom, in fact, frightens them. They follow sacrificial patterns set by their parents, enforced by society, by their terrors of 'they say' and 'what will they think?' and by constant inner dialogue that weighs duty against desire and pronounces duty the victor.

John Stevens, for one, cannot be blamed for having lived too timidly. He remains the utopian, exemplifying the possibility of optimism in a cheated world that worships lucre. Implicit within his work is a forward thrust; replacing the scarcity of the theoretical with the excess of the creative act. Stevens' music continues to be a betrayal to the musically conservative, pushing against the limits of his art, rather than using his equipment in some tired derivative form and writing 'proper pieces' for multinational record companies.

Having never set out to pay compliments to paying people, Stevens' music has not found commercial favour over the years. Clearly the respect of the public for art is a myth that should be denounced at all times. As a poet and teacher Eric Mottram has noted, 'The modern jazzman has no security but his own integrity and genius.' Furthermore the competition for patchy support by big business carries the danger of propelling this experimental music over the edge that separates it from mere craft, commercial design and the mass media. Some have fallen into the trap more readily than others. And yet Stevens, vigorously re-inventive, lives and thrives! 'I'm havin' a great time,' he insists, popping his fingers, rubbing his head and bouncing around the front room while listening to the playback of his experiments of 18 years ago. '90 percent of what I've done has been outside the [MU] rate. But it's meant that if something seems like a good idea, it gets done.'

Hard times but a rich life. Indeed, the connotation of A Luta Continua ("The Struggle Continues") is political rather than autobiographical, referring directly to the mid-1970s movement against Portuguese imperialism. 'This is music as a manifestation of our artistic, philosophical and political integration,' claims Stevens. 'I work in a combined arts fashion. Everything is in tact but integrated rather than running parallel. There is a cohesion between elements.'

As is the case with the related project Mutual Benefit, A Luta Continua is a scheme of linked compositions. Improvisations are structured by shape rather than chord sequences, following what Stevens calls 'rhythmelodic' statements: "As the music is uniformed by harmony, each rhythm has a melodic content and vice-versa. I see Ornette Coleman as a great exponent of this in his use of speech-like patterns as opposed to arpeggiation. I've never worked within keys because I don't relate to systems. I think of a piano as a palate of colours."

"On here you're hearing captured studio group performances. The level of playing is the same as on a gig. It's all done in one take. These musicians are happy to improvise according to the nature of the material, which is lovely, rather than just showing you what they can do. I think of it as the Spontaneous Music Ensemble on Wheels; free-jazz-rock. I really fancied trying it out at the period in my life. I'd had an accident and had my kneecap removed. As a drummer that's most inconvenient. Not only did it take a long time to sort out, but the leg set rigid. While being laid up, instead of listening to Charlie Parker or Ornette again, I got this appeal to listen to dance music. It's ironic because the last thing I could do was dance."

"Whereas before I'd listened to Stevie Wonder, Marvin Gaye, James Brown and Curtis Mayfield from the 'outside', now I had this plan in my head. I thought: when I get out of this shit, I'm going to form an orchestra, based on the freedom of the SME but with a dance feel. After my leg healed, I was invited to play with John Martyn. That was influential and refreshing. I've always been glad to get opportunities to play outside the pettiness of the official jazz scene where I'm normally associated. At the time I was also playing with Trevor Watts and I'd run into the electric bassist Pete Cowling on a thing I did for Dudu Pukwana - fantastic. And through the association with John Martyn I met Steve Hayton who was with Daddy Long Legs. He looked like a hippie-hillbilly and played country rock."

"Eventually I got a band together around these guys. I was excited about taking an acoustic approach, while using the fluidity of electronic sounds. I wanted to make a statement. There were lots of things going around called jazz-rock, but whereas jazz had reached a point of free group improvisation, in jazz-rock the rock bit usually won over the jazz. That freedom of people playing as a group within the rhythm and moving pitch-wise wherever they want was missing."

"The Dance Orchestra and Away form a combined area, a whole entity. I was going to call the project Away To Dance. All that changes is the means of expression. With the bigger group, you've obviously got more textural possibilities. It requires more control because there are more people to deal with, but without limiting their freedom. What you get is this fucking amazing sound. On a track like 'Sandwich' which is a static structure - a controlled improvisation with a restricted stretching point, people play together as closely as possible in a micro-tonal way. But there's always a buoyancy in the music, however radical the statements about pitches and organisation. It always swings! I believe in this music. It lasted for a time. Ideas come, you note them down, work out what's worth including and move along."

Now it is cast aside, abandoned as sterile and momentary. The world and Stevens' organism *) are in continual rebirth. The spinning earth! Always renewing, inventing! An explosive intelligence opposing deadening homogeneity head on. Stevens will not repeat the jazz innovations of the past, even his own. To quote Francis Bacon, one of his favoured painters, "He that will not apply new remedies must accept new evils; for time is the great Innovator." Today needs a new language and Stevens remains within process.

"By retracing the paths to the earlier heroic life... you defeat the very element and quality of the heroic, for the hero never looks backward, nor does he ever doubt his powers... Why revert to myth?... Behind this process lies the idea not of 'edifice' and 'superstructure', which is culture and hence false, but of continuous birth, renewal, life, life... In the myth there is no life for us. Only the myth lives in the myth..."

For John Stevens, as for the good in all centuries, the struggle for life continues!

| Paul Hillery
@bigmuffsite found this but didn't see it on your concert list https://t.co/NurVAf1AVs
10 months 3 weeks ago
END_OF_DOCUMENT_TOKEN_TO_BE_REPLACED