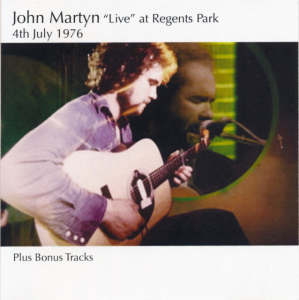 Not everything rare is valuable

I acquired this early June 2012. It was compiled after John's passing but further info about the provenance is missing. Overall sound quality can be described als 'fair'. This can not be said of the production as such.
The first nine tracks (42 minutes) are taken from cassette tape, probably recorded from a radio broadcast by Capital Radio (15 October 1976). The solo concert took place Sunday evening (Sundays in the Park show) and was reviewed by the New Musical Express.
Many songs of the performance are missing: Singing In The Rain, Over The Hill, Make No Mistake-Bless The Weather, Seven Black Roses and Rather Be The Devil. Also My Baby Girl was cut off from One Day Without You.

After the live recordings we get four so-called bonus tracks.
The last 10 tracks are all culled from the VHS tape of the film In Search Of Anna (Esben Storm 1978). So we get pieces of dialogue mixed with fragments of music.

Below
This piece of writing is too amusing not to quote. Man versus woman.
- How did you get that scar on your wrist?
- How did you get those bruises?
- I got into a fight...
- And I tried to kill myself
- Why?
- You get into a lot of fights?
- Do you?
- You win or lose?
- Well I won this one

- You know my mother killed herself
- Dear... How do you feel about that?
- Pretty bad... Well, you know... We were pretty close...
- I think I'd feel really guilty if someone I was close to, killed himself - especially if I was in a position where I could have done something about it
- I couldn't do anything about it... I wouldn't try to kill myself, either
- It gives me the shits talking about this, anyway
- Well I'm sorry you're depressed... and don't feel guilty about that, either

More below
This one must be a crash course in courtship set against the sounds of Couldn't Love You More
- So where does Anna live?
- Crown Street, Surrey Hills. You know where that is?
- What are you gonna do if she isn't there?
- I'll find her
- Look is there somewhere I can contact you in Sydney? Take you out of something? Pay you back for the ride?
- You don't owe me anything... I tell you what, I'll give you my phone number, you can give me a ring if you feel like it, okay?
- Okay... and if you don't want to talk to me, you can hang up!
- Okay
- I'm gonna miss this old tank!

Wrapping it up
- Where do you wanna go?
- I'll take it where the money is
- Whatever you think is a fair thing

- Why did they put you in jail?
- Well why not? We'd be hanging around, the cops would cruise past, pick us up, take us down the station, beat the shit out of us... I don't know, I just can't get used to it. Sometimes I feel as if I've never got out
- You'll be seeing Anna soon - you should be looking forward to that
- Yeah, I suppose so
- So what's different?
- Everything! Everything's different. Bang! One day you're free, the next day you're not
- Well you're free now...

Well there it is Jerry. That's where the money is, buried under those flats

| James Barry
@OneWorldJM Hi, I was sure I remembered seeing JM at the Theatre Royal, Bath but could find no date in the concerts… https://t.co/Vo0ewtPGFj
5 days 3 hours ago

| One World
Small change in name of the website again https://t.co/UVWX5NLsIy
6 days 4 hours ago