Johnny Boy Would Love This - A Tribute To John Martyn 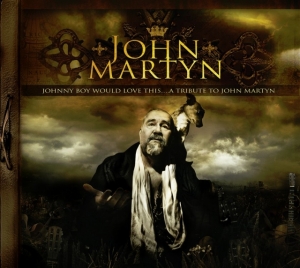 An impressive lot of posthumous friends.

The package -'Collectors Edition'- includes a double CD digi-pak, a 40-page booklet, and a bonus DVD that features interviews with a number of the contributing artists, performance videos, and rare live performances by John himself.

Adding to this unique audio experience is the inclusion of John's actual guitar work on two of the tracks. One of them is You Can Discover by Cheryl Wilson. The other one is Anna by Brendan Campbell: he says "It was a huge honour to add my voice to John's guitar on this song." Which raises the question when the Anna recording was made. Jim Tullio clarifies "We recorded that track originally for On The Cobbles in 2003 and John never did do a vocal on it, so Gaz [Gary Pollitt, hb] found Brendan Campbell in Glasgow and we felt he would be the right match for the song and it would be a fitting track for the tribute."

The Phil Collins track, Tearing And Breaking, might fire a memory. Indeed a song by this name featured as opening for Phils 2CD sampler Love Songs: A Compilation... Old And New (2004). However the version included in this tribute CD has been re-recorded at Phil Collins' own request. He and John wrote the song together.

Sweet Little Missing
In the first track listing, Sweet Little Mystery is also included in a version by Devendra Banhart. But it did not make it to the final selection. Banhart, who is a keen Martyn fan who helped recruit Beck, Vetiver and others to the project, chose this song for himself. But, according to Mark Edwards in a Sunday Times article, 'despite four separate attempts to record it, he never managed a version he thought was good enough.'

"Proceeds from this CD will go to John's family"