Harmony Of The Spheres 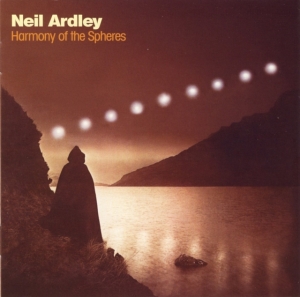 John does not take much space in the jazz-rock domain.

Recorded Morgan Studios, London, July-September 1978. The contact between Martyn and coproducer Martin Levan might very well have led to the decision to let the latter produce the Grace And Danger album.

Atmosphere of Weather Report, Stanley Clarke, Klaus Doldinger's Passport.
John made valuable contributions to this synth-dominated album but does not quite seem to get enough room. His playing is much more confident on his own records. There was a ITV 'South Bank Special' featuring live versions of the material on the album. The program lasted 30 minutes, was directed by Peter Walker and broadcast in 1979.

The German pressing had the same cover with some additional personnel credits below the title.

There are some interesting explanatory liner notes on the album:

THE HARMONY OF THE SPHERES

The Harmony of the Spheres is the sound that rings throughout the heavens - a celestial music that the ancient Greeks believed was given out by the planets as they float through space.
In about 500 BC, the Greeks reasoned that the planets would emit musical notes related to their orbits. In keeping with their desire to see beauty and order in all things, it followed that these orbits would lie at such distances one from another that a perfect harmony must resound throughout the heavens. Although no such music has yet charmed astronauts' ears, the Harmony of the Spheres has long been a symbol of man's desire to find order in the complexities of the Universe.

This simple and beautiful idea intrigued Neil Ardley and led him to wonder what the Harmony of the Spheres would sound like if indeed it existed. He set about converting the orbit times of the nine planets in our solar system into musical notes. Hence Pluto, being the farthest from the Sun and the slowest-moving, would produce the lowest note, and Mercury being the nearest and fastest-moving planet would produce the highest note.
By a remarkable and interesting coincidence, the ratio of the orbit times of Mercury and Pluto is virtually identical to the ratio of the frequencies of the sounds at the upper and lower limits of human hearing. The Harmony therefore covers the complete range of human hearing and, extending beyond the range of acoustic instruments, it can only be produced on a synthesizer. Having finally converted the orbits of the planets to musical notes, Neil was delighted to find that the resulting chord was 'appropriately both mysterious and dramatic.' Spurred by this discovery, he set about composing music based upon the Harmony of the Spheres and this album is the result.

The actual Harmony is heard at the conclusion of the track entitled Soft Stillness And The Night.