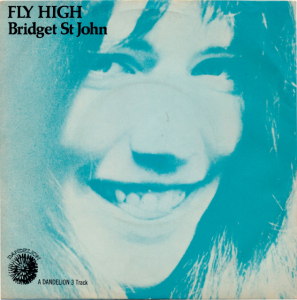 Side One: "Fly High"

The first Dandelion 3-track single has our Bridget, singing better than she's ever been heard before, in spectacular productions of two of her own songs and an acoustic version of Leonard Cohen's classic "Suzanne". The first two lines of "Fly High" are from a poem by Robert Louis Stevenson.

Four hard years of motorways, railway stations and performances have matured Bridget's singing and writing to an astonishing degree, and this record is evidence that she is ready to take her place among the great singer-songwriters of our time.

Nigel Cross wrote about this song:

However, one song really deserves to be singled out, the majestic Fly High, lyrically based around a fragment of Robert Louis Stevenson poetry, taken from A Child's Garden Of Verses, one of her favourite books when she was growing up. Bridget sounds positively inspired, her voice soaring in a way it's seldom done since, buoyed by John Martyn's spacey, echo-plexed guitar runs, which will remind old fans of the genuinely exciting solo shows he was doing at this time. The powers-that-be at the record company also saw some hit potential in this song and it was re-recorded as the album's 45 chaser and featured girl backing vocals, arranged by some-time Beatles collaborator Richard Hewson, though Bridget still maintains their voices are 'a little too church-like' against her own.

| Paul Hillery
@bigmuffsite found this but didn't see it on your concert list https://t.co/NurVAf1AVs
10 months 3 weeks ago
END_OF_DOCUMENT_TOKEN_TO_BE_REPLACED