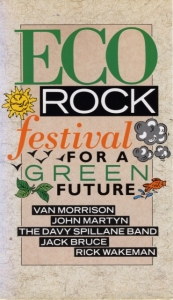 The three day festival took place on 22nd-24th July 1988 in St. Andrews, Scotland. John probably played on the Sunday afternoon (24 July). In the echo of Live Aid, it's motto was Fife Aid (music festival for the environment). Also on the bill were Marillion, Runrig, Blues 'n Trouble, and Tam White & Boz Burrell. Guitar player Jim Condie, who put together a band of local musos for Van Morrison, remembers:

"Van played last on the Sunday evening, starting at about 9pm, just as the sun was sinking. This was particularly memorable as it had rained all weekend till we went on stage, whereupon when we hit the stage the rain ceased, the clouds parted and the sinking sun came out! Shortly after we finished a fierce wind sprang up and virtually destroyed the main stage overnight!"
"The [Sunday] crowd was about 15,000 strong, though the organisers had hoped for a turnout of 60,000-plus. The original idea had been to satellite link this festival with others in, I think, Delhi and California. The initial plan had attracted quite a few biggish names like Go West, Transvision Vamp, and even Bowie expressed interest. As it was, the organisers suffered a substantial loss at the end of the day."

Which was probably the reason the video was produced later on, one could reason. At first, Morrison did not want his show to go on satellite. Copyright 1990, Fife Aid Trust. Sleeve says track #5 is John Wayne. John plays a red guitar (5) and a white guitar (6). Dealer is played in the vein of the Live at the Shaw theatre 1990 performance, with a piece of Outside In.
14 January 2004, Australian company Umbrella Entertainment released a digitally remastered DVD for the price of AU$ 24.95.

| Paul Hillery
@bigmuffsite found this but didn't see it on your concert list https://t.co/NurVAf1AVs
3 months 1 week ago
END_OF_DOCUMENT_TOKEN_TO_BE_REPLACED