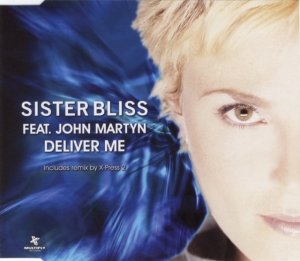 John Martyn meets Faithless partner and gets hyped into chart.

Actually two singles have been released with different remixes; both cost £ 2,99.

As both singles had the same title, I suspect they did this in order to get in the charts easier. The single market is rather small, and all fans will buy the two singles simultaneously.
If this is true, the strategy worked: one week after release it reached number 31 in the UK Top 40 chart.

The single was recorded 17 August 2000 in the Swan Yard studios in Islington, London, and has been played for the first time by Pete Tong on Radio 1 17 November 2000.
You can read more about the single's history in the 7 magazine story in the Articles section.

Producers Rolo and Sister Bliss (the people behind Faithless) originally wanted to include some Martyn material on a sampler in the Back To Mine series but licensing proved difficult. So they invited John to their studio to work on something fresh. Sister Bliss, about working with John: "It went very well; he just opens his mouth and you've got instant 'Nick Drake in a chill-out state'. and: 'He's probably the best singer I've ever had the honour of working with, he's a genius.'

Line-up:
Keyboards by Sister Bliss, vocals and guitar by John Martyn.
John's vocals were recorded by Phill Brown (the One World sound engineer).

Buyes of the single could download a Lee Coombs remix on Multiply's website. This remix was only released on a 12" promo.

| Paul Hillery
@bigmuffsite found this but didn't see it on your concert list https://t.co/NurVAf1AVs
10 months 3 weeks ago
END_OF_DOCUMENT_TOKEN_TO_BE_REPLACED