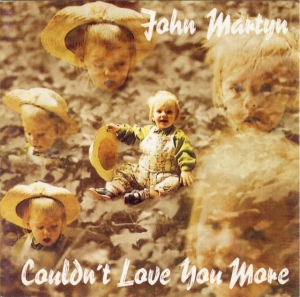 Unfortunate attempt to rerecord the back catalogue. The songs are not bad per se but the album as a whole lacks variation and it was released without John's consent.

Release of this album happened without John's consent. The sleeve can easily pose as the ugliest one in John's entire catalogue. The vinyl version only counts 10 tracks and the vinyl is not of the greatest quality, either.

Universe CDSP 99893 has a different track listing: Lonely Love, Couldn't Love You More, Sweet Little Mystery, Head And Heart, Could've Been Me, May You Never, Ways To Cry, Angeline, Man In The Station, Solid Air, One Day Without You, One World, Never Let Me Go, Over The Hill, Fine Lines. Italian release (see right) has different cover based on the Sweet Little Mystery picture and a turquoise CD with original track listing.

2 April 2007 Voiceprint rereleased the album on the One World label (OW126CD) with two bonus tracks from Live At Bristol '91: Couldn't Love You More and Never Let Me Go. This re-release is to be found in the Collectors Items section.

| Paul Hillery
@bigmuffsite found this but didn't see it on your concert list https://t.co/NurVAf1AVs
6 months 2 weeks ago
END_OF_DOCUMENT_TOKEN_TO_BE_REPLACED