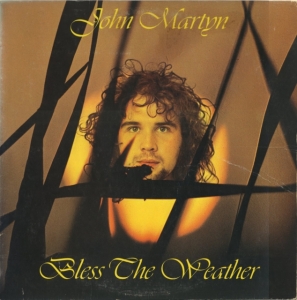 The first 'real' John Martyn album and a creative explosion that, together with the next four or five, forms the core of his claim to fame. Many rate Bless The Weather even better than Solid Air.

'So nice to see our John again.'- Paul Wheeler When Martyn first moved down to Hastings on England's channel coast from London in 1971, the change of the environment inspired a number of new songs. As Hastings was a resort and fishing centre, its economy was ruled by the elements more so than any place Martyn had lived previously; hence the song 'Bless The Weather'.

Q magazine chose Bless The Weather among the dozen essential folk albums of all time in 1999. According to Q, the album was recorded in three days. This was based on the following passus from Melody Maker in 1971:

[Bless The Weather] was made in three days, with at least 60 per cent of the material written in the studio according to John. In that situation did he take control and tell the backing musicians what to play?
"The only concrete suggestion I made was to ask Danny Thompson to play bowed bass on Bless The Weather (the title track)." He felt that they were competent enough to work out their own contributions to the music.
"The last album has been the least planned. All the rest, [except] Stormbringer, were a bit thought out. This one felt really natural. It stayed in my head and when I played in the studio it all came out. It was really fresh."

And late 1973, John told Guitar's Dave Dyke: "Bless The Weather was written entirely in the studio. That was the most spontaneous album I've ever done. I had all the tunes and all the first verses in my head, but all the rest of it was totally done in the studio."

| Paul Hillery
@bigmuffsite found this but didn't see it on your concert list https://t.co/NurVAf1AVs
10 months 3 weeks ago
END_OF_DOCUMENT_TOKEN_TO_BE_REPLACED