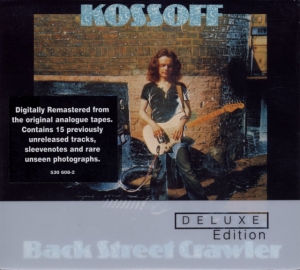 Time Away at full length and May You Never mystery solved.

Track 3 on CD1 and tracks 4, 5 and 6 on CD2 are all from the John Martyn session for the unreleased single version of May You Never. They were recorded on 15 September 1971 with band members Paul Kossoff (guitar), John Martyn (guitar), Tetsu Yamauchi (bass) and Simon Kirke (drums). May You Never was produced by John Martyn, the rest of these tracks by John Martyn and Paul Kossoff. Engineers were Tony Platt and Ron Nevison.
An original 18 minute remix of one section of Time Away (Time Spent) was done on 9 November 1972, engineered by Tony Platt. This version first appeared on the 5 CD box set Songs Of Yesterday.
Later on Paul Kossoff literally cut out one section of this quarter inch mix tape, using it for his solo album Back Street Crawler.

1sitenote:
Molton Gold is a strange spelling as the original name of the track was Molten Gold. This picture is from the booklet and gives nice testimony to Paul Kossoff's appreciation of John. Judged by the poster on the right wall...

Excerpt from the liner notes
"It would appear Kossoff started to pull things together on November 9, 1972, when a mix of an inspired jam he'd had with John Martyn was prepared. This eventually became listed as 'Time Away' on Kossoff's album but had actually been recorded during a session for Martyn's 'May You Never' way back on September 15, 1971. These sessions, arranged to record the song for a proposed single, were never used and Martyn eventually re-recorded the song for single release with other musicians. The original tapes actually reveal an interesting if slightly 'unfinished' version of the proposed single, mixed here for the first time. The band also recorded a couple of jams, and both are released here in their entirety for the first time."
"It is only recently these master multi-track reels have been discovered, and fortunately five of the original seven survive. Kossoff is astounding here and it is interesting to hear him playing around with the 'Tuesday Morning' riff - the earliest known reference to it appears at the end of the first jam."
- David Clayton