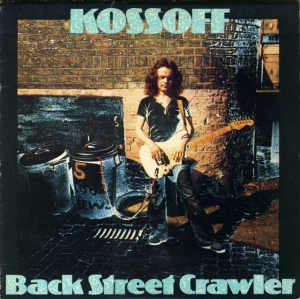 Contains Time Away, part of an impromptu jam between the two guitar players.

Track is spin-off of failed attempt to record single version of May You Never.

Album is first solo effort of former Free lead guitarist after having been kicked out of the band. With only five tracks it is rather short. The album title also became the name of the new group.
Initial release on pink rim label, rerelease on blue island (day/night) label.

Time Away was a jam based on the chords of So Much In Love With You, recorded a few months later in the Island studios, 19 November 1971. John did not know this jam session was to be released; John paid for the studio time because he wanted to record a single version for May You Never.
17 April 2000, an 18 minute version of the jam session was released on the Free 5 CD box set Songs Of Yesterday, under the title Time Spent. The Time Away part was the final section stretching from 11:26 to 17:06.
Later on, in 2008, a Deluxe Edition of Back Street Crawler emerged containing the complete Time Away jam which lasted a whopping 38 minutes and 19 seconds.

For reasons of value for money, one can consider to buy the posthumously released double vinyl album Koss from 1977 (DJM Records DJE 29002), or a budget CD sampler like Collection, Stone Free or Blue Blue Soul.

| Paul Hillery
@bigmuffsite found this but didn't see it on your concert list https://t.co/NurVAf1AVs
10 months 3 weeks ago
END_OF_DOCUMENT_TOKEN_TO_BE_REPLACED