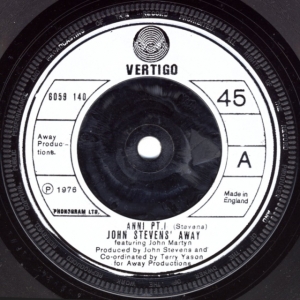 John Martyn on guitar [and vocals].

The two sides of the Vertigo single were edited from a continuous performance of longer duration. The single was also included in a compilation album entitled ‘The Old Grey Whistle Test – Take 2’ (BEDP 001). Nick Stephens’ diary suggests the March recording date although a Phonogram session reel for Daffodils was dated May 23rd, 1976. This latter date may just have been the date on which the tracks were mixed. 15ips st. session reel with Daffodils (tk 1–3): NSA C577/74 + dub from 7.5ips st. session reel with all titles: C577/191. The single was reviewed by Frank Elson in Blues & Soul 18/5/76 p11, by Caroline Coon in Melody Maker 29/5/76 p3 and by Brian Case in NME 12/6/76.