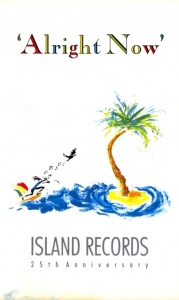 Music video highlighting the spirit and musical diversity of Island Records over the last 25 years.

Mostly live performance, all re-mixed for stereo hi-fi. Artists include: Robert Palmer, The Christians, Eric Clapton, Sly and Robbie, Aswad, Julian Cope, Troublefunk, Bob Marley and U2. And John Martyn. The show was also televised and in the tv-listing Free and Spencer Davis Group were also mentioned.

The actual live recordings were made in Pinewood studios with a lot of Sly & Robbie.

A Zenith production in association with Island Visual Arts ltd. The production is copyrighted 1987, but the 'compilation' 1988. The jubileum was also celebrated with the release in July 1987 of a double LP/CD (31 tracks, 7 90684) and a CD (20 tracks, CID 25) titled The Island Story (1962-1987). To make things more complicated, also a box set of four tapes and a 20 page booklet were released under the title Island Life.

| Big Muff
Photographical mystery solved - except for the name of the photographer https://t.co/oSCnGikFSx
4 months 3 days ago

| Big Muff
Blast from the past: Guitarist interview from 1985. Ever heard of Scheme? https://t.co/Qg4tDy0zEX
4 months 1 week ago

| Big Muff
End of the one man band, with #johnmartyn https://t.co/5gR9OZOsDH
4 months 2 weeks ago
END_OF_DOCUMENT_TOKEN_TO_BE_REPLACED