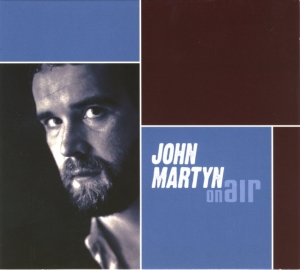 Concert recording made by Radio Bremen in the Bremen Town Hall (Rathaus, Festsaal), Germany on Wednesday 17 September 1975, for "Forum Junge Musik". This was John's second concert in Germany. Radio Bremen made some more JM recordings but this one is the oldest in their archives.

CD well produced and presented in a stylish glossy cardboard fold-out sleeve. First time live release of Go Down Easy. In fact it counts 7 tracks because The Message (listed as Mhairi's Wedding) is part of a medley together with Make No Mistake and Bless The Weather.

It's a quite well-known fact that Scottish singer, songwriter and guitarist John Martyn is an artist of many temperaments. A man who has raised some hell in his lifetime but also produced uniquely intense music, delivered in a genre-defying personal style unlike anybody else's. In the course of a 40-year-career Martyn has made a couple of dozen albums, some of which rank with the very best in popular music. He may have seen his share of turbulence and difficulty in his professional and personal life, but he's always remained a most fascinating recording and performing artist, a man who never lost touch with his original muse. This historic concert recording made in Bremen/Germany on September 17th, 1975, features the man in his prime.

The 27-year-old John Martyn came to Bremen to play his second-ever concert in Germany. He had made his German debut just a couple of months earlier in Freiburg close to the Swiss border. That gig had not been going well. Particularly since Martyn had been billed as 'England's folk guitarist No. 1'. The conservative German folk purists in attendance had rejected John's new style and Martyn in turn rejected the folk bag. His new sound was marked by freedom, immediacy, and a fondness for new technology. He was starting to use gadgets like the 'Echoplex' tape delay machine, a sound that soon became his trademark.

In Bremen, it was a different situation altogether. John Martyn was very much in control and he really came to play. A couple of hundred people had made their way to historical Town Hall to listen to him, a testimony to the fact that the Hanseatic city in Northern Germany had much to offer in terms of music at the time. People were curious and hungry for new and exciting musical experiences and this was exactly what John Martyn's performance was all about. He offered intense interpretations of classic original songs like 'Bless The Weather' and 'Solid Air', mesmerizing folk and blues covers like 'Jelly Roll Baker' and 'Mhairi's Wedding', and a spine-tingling version of Skip James' 'I'd Rather Be The Devil' closing the show. Radio Bremen's recording of this historic evening remained in the archives for more that 30 years and 'On Air' marks its first public release ever. Listening to it again from a contemporary perspective it is a fascinating aural document of a young artist very much in progress. An artist who has continuously pushed his music into new directions up until the present.

These days John Martyn lives in rural Ireland. He continues to record but has scaled down his live appearances due to bad health. He has lost none of his musical abilities, however, and his career has remained a journey that is marked by an incapability to sell out artistically. John Martyn may not have reached the upper regions of the pop charts and may also have walked the wild side a little more than most of his peers - but his integrity as an artist has remained gloriously unscathed. 'On Air' may be just a snapshot from his fourty years in music, but it presents the pure musical essence of a great and very original artist.

| Paul Hillery
@bigmuffsite found this but didn't see it on your concert list https://t.co/NurVAf1AVs
10 months 2 weeks ago
END_OF_DOCUMENT_TOKEN_TO_BE_REPLACED