Ain't That Far From Boothill 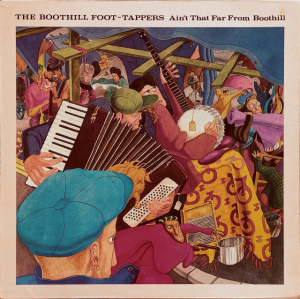 Obscure track on an obscure album

The Boothill Foot-Tappers was a British folk/ ska / bluegrass band that formed in 1982 and associated with the folk music revival in the United Kingdom. They had a minor UK hit single July 1984 with Get Your Feet Out of My Shoes. The band split up early 1986 after touring the UK to promote their album during the last four months of 1985.
Singer and DJ Wendy May claimed on Facebook that John Martyn features on their début album and this is correct. On the inner sleeve, John is credited for Guitars on the track Stand or Fall (B3), 'courtesy of Island Records'. Producer Dick Cuthell did percussion for the occasion.
It is not quite clear why John was approached for this project. He did meet Andy MacDonald probably, ten years before being signed to Go! Discs and Independiente.

The album was produced by Dick Cuthell and mixed by Colin Fairley, except A2, B6 produced and engineered by Bob Andrews & Colin Fairley.
"Special thanks to: Andy Keating, Pete Brown, Neil (orange peel), Andy McDonald and everyone who's helped us."

SWEET SOLE MUSIC
• The Boothill Foot-Tappers, on the brink of a massive 60-date UK tour, release their début LP on October 4. Ain't That Far From Boothill contains 12 tracks, including ail the band's singles to date, and is produced by the legendary Dick Cuthell, who also guests on the record. The band have announced that everyone attending their gigs will receive a one pound off voucher, redeemable on their LP.

So the official release date of the album is 4 October 1985, although and advert from the period claims 'Out now!' promoting an extensive tour starting 7 September.
Record Mirror also published a sympathetic review in the same issue.

Guitar player Kevin Walsh explained the name of the band to Sounds in March 1984: "Boothill was a graveyard and I just see this country as a graveyard at the moment. But I don't see that as an excuse to sit back and feel sorry for yourselves so you might as well foot-tap all over it and have a good time!" Summarizing the band's mission on another occasion: "bringing a joyous noise to a country in a shit state".

| Paul Hillery
@bigmuffsite found this but didn't see it on your concert list https://t.co/NurVAf1AVs
10 months 3 weeks ago
END_OF_DOCUMENT_TOKEN_TO_BE_REPLACED