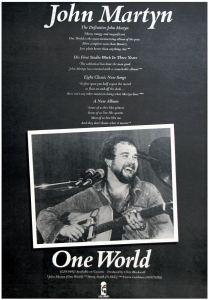 This full page advert quotes two reviews, one from Melody Maker's Monty Smith (19 November) and one from Vivien Goldman (Sounds, 26 November). This places the earliest possible publishing date at 3 December.

"Mean, moogy and magnificent.
One World is the most mesmerising album of the year.
More complete even than Bowie's.
Just plain better than anything else." **

"The sabbatical has done the man good.
John Martyn has returned with a remarkable album." **

"So fine spun you half expect the record
to float on and off the deck...
there isn't any other musician doing what Martyn does" ***

| Paul Hillery
@bigmuffsite found this but didn't see it on your concert list https://t.co/NurVAf1AVs
10 months 3 weeks ago
END_OF_DOCUMENT_TOKEN_TO_BE_REPLACED