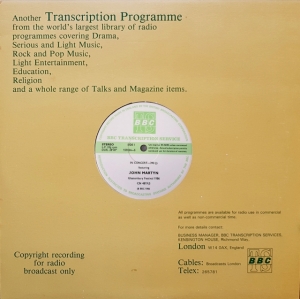 Radio Broadcast of Glastonbury 1986 performance. Put on vinyl by the BBC.

Vinyl registration of Pete Drummond radio broadcast, issued in the BBC In Concert series. John played Stage One of the Glastonbury Festival on Saturday June 21st 1986.
On the cue sheets, Outside In is misspelled Inside Out and Lookin' On comes out Looking In. The same tracks made up the best part of the BBC Radio 1 Live In Concert CD, but Richard Skinners introduction was left out there. ("This is Richard Skinner in London with the BBC 'In Concert' programme...")

This record is EXTREMELY rare. The BBC Transcription Service was founded to license BBC Radio programmes to overseas broadcasters, who were authorised to broadcast the programmes for a set period, usually two or three years. The programmes sold in this way covered every part of the BBC's output. Typically only one hundred copies of each disc were pressed with instructions to the overseas radio network to DESTROY THE DISC at the end of the licence period.

On the label it says specifically:
Copyright record made in England by the British Broadcasting Corporation. Reproduction restricted to broadcasting stations authorised by the BBC.
Use expires 31.12.90 unless contracted otherwise. Annual subscription permits continued use for duration of contract.

| Paul Hillery
@bigmuffsite found this but didn't see it on your concert list https://t.co/NurVAf1AVs
10 months 2 weeks ago
END_OF_DOCUMENT_TOKEN_TO_BE_REPLACED