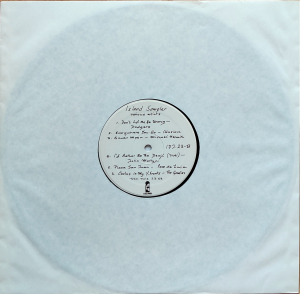 Rather strange promo compilation from So Far So Good period.

Side A contains mainly bad rock music apart from the reggae track by Rico Rodriguez. On side B John is surrounded by country music, flamenco guitar and a miserable attempt at Bonzo Dog humour.

I'd Rather Be The Devil lasts 8:34, which is longer than the compilation version which clocks in at 6:10. This makes it compliant with the version on Ain't No Saint, meaning it was recorded during the closing concert at the Rainbow Theatre, 16 March 1975.

The label suggests to be hand written but is in fact printed, possibly a marketing effort. Paco de Lucia's track is misspelled Plasa San Juan.
Total running time for side A is 23:37, side B 23:53.

I had to estimate the release date but based on the releases involved, it was probably around April 1st 1977.

| Paul Hillery
@bigmuffsite found this but didn't see it on your concert list https://t.co/NurVAf1AVs
10 months 2 weeks ago
END_OF_DOCUMENT_TOKEN_TO_BE_REPLACED