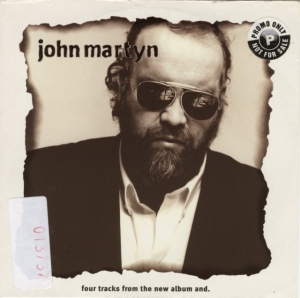 "four tracks from the new album and."

"for promotional use only"

There were copies with stickers from Anglo Plugging on the back side:

This is a selection of tracks taken from the Scottish born John Martyn's 25th album. No. 1 was released in 1968 as the very first white artist (sic) signed to Chris Blackwell's Island Records. His career has recently taken him to Chicago where he hooked up with a young, hip hop obsessed studio engineer Stefon Taylor: 'And' his 25th album was born. For a man who has always found himself alongside the greats like Muddy Waters, Nick Drake and Steve Winwood, it is no surprise he now finds himself alongside the likes of Paul Weller and Portishead at his present home Go! Discs.

It is not quite clear where the claim of 25th album came from, since And. is number 24.

| Big Muff
@raringtoread @Guy_Garvey @BBC6Music @LdsIrishCentre Coming up, will check it out
3 weeks 3 days ago