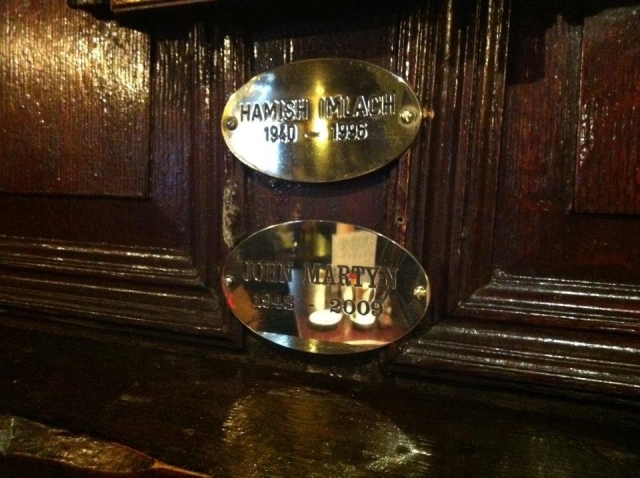 Jim McKnight, who knew John well, had this plaque made and installed in the Scotia Bar, Glasgow on 18 February 2012.
"It is placed under Hamish Imlach's, which has been on the wall since Hamish died, as Hamish was John's mentor." Nice touch.
The Scotia Bar (established 1792) is the oldest pub in Glasgow and can be found at 112-114 Stockwell Street. A third plaque has been added for Gerry Rafferty.

Nice to see John remembered by an additional brass plaque at the Scotia bar Glasgow, although I truly wish he'd just walk in & we'd drink that long due pint & wee half together! Just a little bit of background info about the first (Hamish Imlach) plaque for your archives:

When Hamish died non of us (including the Imlach family), had any real idea what to do with his ashes. Various ideas were suggested but nothing decisive was initially agreed. Hamish used to sing a version of Black Is The Colour which has the lyric 'I go to the Clyde, I mourn & weep', so I suggested we place the ashes in the Clyde which would flow & carry his spirit through his homeland. This would also be the best non religious memorial to the big man plus be accessible to all. I also suggested a simple plaque with Hamish's name & birth/ death dates only, be placed at the falls of the Clyde near Lanark but due to various complications (another story) it didn't work out.

Over the following months I was often asked by Hamish fans (especially over here in mainland Europe) where they could 'visit Hamish's grave', to which I'd reply 'Visit the Clyde & dip your fingers & make contact...' Somehow most fans seemed to expect something less esoteric & need something more tangible/ solid to see, touch & experience, this is where the Scotia Bar comes in. With the agreement of the Imlach family, I put forward the idea of placing the plaque in the 'Scotia' where Hamish often performed & socialised. What better temple to the whole ethos & code of the life of such a consummate musician & entertainer like Hamish could there be?

Due to commitments in Germany, I left the responsibility for arranging the installation & fixing of the plaque with the Imlach family. I first saw the plaque whilst gigging there a year later. It felt comfortable & good to have big H there with me. I'm so pleased that we have a genuine place of 'pilgrimage', we can raise a glass in honour, still dip our fingers in the Clyde or just simply sit there & think.

It feels very strange & sad to see memorial plaques to two of my very good friends above one another, but it's right & correct that they're remembered together. I'd like to say a big thank you to Jim McKnight for adding John's plaque & recognizing the feelings involved & what it's all about there in the Scotia; I'm sure Hamish would be honoured to have John up there with him & John proud to be with Hamish too.

Knowing them both, maybe they're raising a glass together to the Scotia Bar!

| Paul Hillery
@bigmuffsite found this but didn't see it on your concert list https://t.co/NurVAf1AVs
10 months 3 weeks ago
END_OF_DOCUMENT_TOKEN_TO_BE_REPLACED