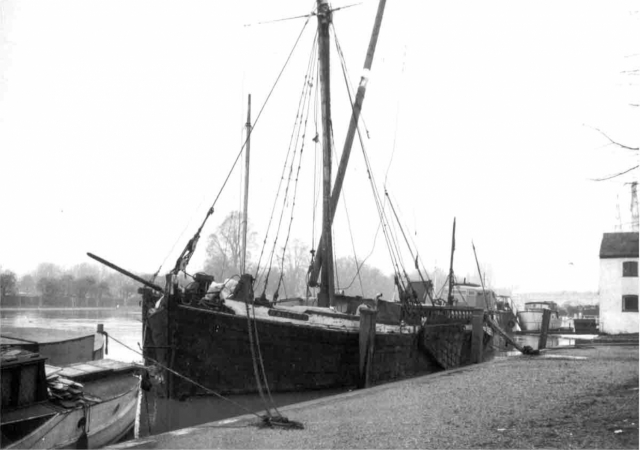 During the sixties this was a famous place where folk musicians could perform: the Kingston Folk Club also known as The Barge. It was an old Dutch ship moored at the quay in Kingston upon Thames. Anyone who was anyone played this small venue one time or another. In 1965 Paul Simon performed, Jackson C. Frank was a regular guest and Sandy Denny made her first public appearance there. Theo Johnson, who managed the place, also performed himself three times a week with his resident group called The Whalers or The Barge Crew. John Martyn played the Kingston Folk Barge for the first time the 13th April 1967. And later that same year Johnson told the aspiring musician that he would make him a star. He had secretly taped John playing Fairy Tale Lullaby and took this demo to Island boss Chris Blackwell.

The space was below deck and small; it could hold about fifty guests. As Philip Ward describes in his book about Sandy Denny, it could only be "reached by a flight of stairs lit by the only window in the place, where resident singers and guests were dependent on intermittent generator power and candle light – a health and safety nightmare by modern standards." Other words describing the barge are dusty black windows, dark stairs and 'musty air common to all timber vessels'.

John Neil Munro's biography quotes Tim Denley in a similar vein:
"It was previously a working river barge and was both truly disgusting and a fine venue in equal measure. It had to be pumped out regularly; it was cold, damp and was probably never cleaned. The gangplanks were very wobbly – really, Health & Safety would have had a field day inspecting it. The owner was very fond of cheap sherry but it was a great place to play as you could just turn up if there wasn't a big name on that night. No other venue in the area attracted so many players and it was nearly always full. Listening to John there was a truly eye-opening experience – his style was unmatched and completely unique. He was experimenting with open tunings and I remember being fascinated watching him." Theo Johnson features on a 1965 mono album Hootenanny At The Barge (Summit ATL 4150) together with Rodger Evans, Dave Shelley, Janet Greenfield and The Barge Group, but this does not seem to be a live recording. Also a 45 4 track EP was pulled from the album just called Hootenanny (Summit LSE 2062).

| Paul Hillery
@bigmuffsite found this but didn't see it on your concert list https://t.co/NurVAf1AVs
8 months 2 weeks ago
END_OF_DOCUMENT_TOKEN_TO_BE_REPLACED