It has been 14 years that John passed away. He still manages to attract new listeners and every last weekend of January, fans, friends en family come together in the Clutha (Glasgow) to enjoy music and each others company. This year was no exception. While searching for an old concert in Barnstaple, I stumbled upon a remark by DJ Wendy May: "After extensive touring and some John Peel sessions they eventually signed to Phonogram and made an album in 85, which featured the legendary John Martyn on guitar." She is referring to a band called the Boothill Foot-Tappers. They made exactly one album that surfaced October 1985: Ain't That Far From Boothill. It was released by Mercury (MERH 76) and John is indeed credited for Guitars on a track called Stand Or Fall (side B, track #3).
No idea why this track was never mentioned in the older discographies before. It has been included here in the Collaborations section and I also found a review.

This picture was shot for Permanent Records. Probably around the time they released Couldn't Love You More (September 1992). It was not used until April 1997 though, for the cover of The Very Best Of.

War hero Thomas McGeachy lived with danger long after he hung up his rifle. But the 64-year-old ex-commando was blissfully unaware of the potentially-explosive situation for 40 years.

So there was this Scotsman, Irishman and Englishman propping up the bar in a shabby pub in the heart of Glasgow. The Irishman, whose name escapes me, and his Scottish pal, John Martyn, are heading steadily out of the realms of dreary sobriety towards that state of intoxication which Martyn, in his brick thick Glaswegian brogue, refers to simply as a "hoolie". Few people see the ashes of total and utter chaos from which the phoenix that is a concert arises. On Sunday, 21st August I was privileged enough to witness this miracle. The concert was the Jansch / Martyn configuration with the local support of Dodsworth and Sullivan. 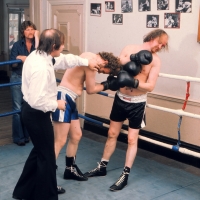